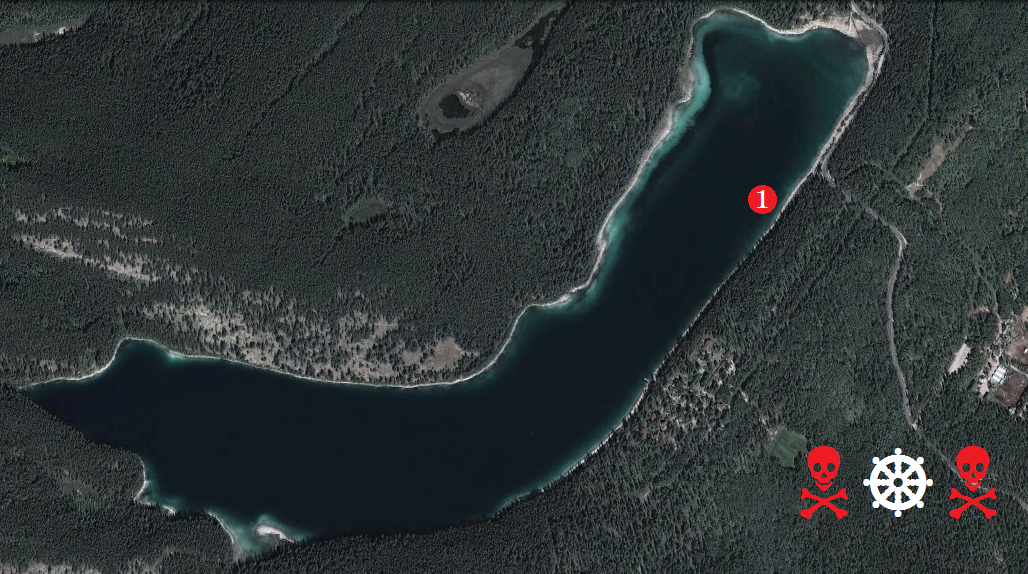 The History:
Patricia Lake is notable for its involvement during World War II with Project Habbakuk, a plan to build an unsinkable aircraft carrier from an ice-based composite material termed "Pykrete".

Initial studies of natural lake ice had been carried out at Lake Louise. In January 1943, Patricia Lake was chosen as the test site for building a prototype vessel. The planned vessel was to be  2,000 feet (600 m) long and the prototype was to be a 1:10 scale model of this. In fact, the beam was to approximately this scale, but the length was only 60 feet, about a third of scale.

Patricia Lake was chosen for this work on account of having rail connections at Jasper and being a suitably cold, remote area that already had military training involvement in the area  as  camouflage. There were also Mennonite and Doukhobor communities nearby, religious  conscientous objectors, who could provide the labour needed.

Pykrete construction material for the full-sized ship was to be a composite of ice and sawdust, maintained by refrigeration. The first experiments had used natural lake ice, in a Canadian winter. The model ship was to use plain ice, but partly natural and partly refrigerated. Construction proceeded through March 1943 by building a wooden cabin on the frozen lake, installing refrigeration equipment and a nest of 6 inch cold air ducts, and then increasing the height of the ice wall around the cabin. As weight increased, the bottom of the "hull" was sawn free from the lake ice and the model floated free. In June the refrigeration was switched off, but the model took the whole summer before melting and sinking.

A diving expedition to the site in 1985 found the  remains of the model on a steep slope just off-shore at a depth between 26 and 43 metres. Although the refrigeration equipment was removed before sinking, there remain the wooden walls of the hull, an "incredible jumble" of cold   air ductwork and also a great quantity of the bitumen used as part of the insulation. As of June 26, 2011 there is only the west wall of the structure still intact; the rest has fallen to pieces and is strewn from 40 feet to 90 feet in depth. There is a plaque placed underwater at the site noting its part in World War II history.