Leatherback turtle that washed up in Cape Breton died of starvation 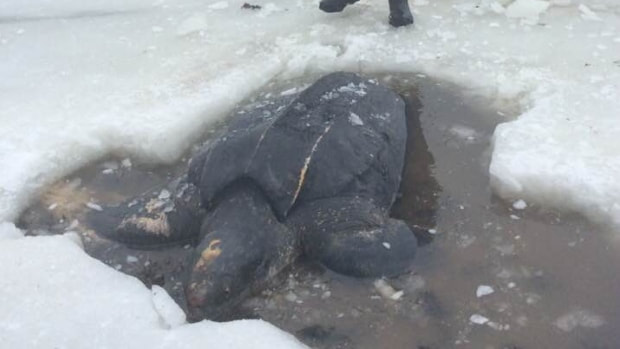 By Peggy MacDonald, CBC News
A rare leatherback turtle found along the icy shoreline of the Bras d'Or Lake in Cape Breton, N.S., appears to have died from starvation, says the wildlife pathologist who conducted a necropsy on it.

Laura Bourque, of the Canadian Wildlife Health Co-operative, conducted the examination Wednesday evening at a lab in Charlottetown. The turtle didn't show signs of disease or entanglement, she said.

"It's a big one. Because it was emaciated, it didn't weigh quite as much as expected. It weighed about 640 pounds [290 kilograms]," said Bourque. "But its carapace, or its shell, was close to two metres in length, which is an adult-size carapace."

An endangered species in Canada, leatherback turtles are known to swim up to 12,000 kilometres a year and dive to depths of up to 1.2 kilometres. But they usually only come ashore to nest on warm tropical and subtropical beaches, so it's a bit of a mystery as to how the turtle ended up so far north in winter and so close to land in the inland sea.