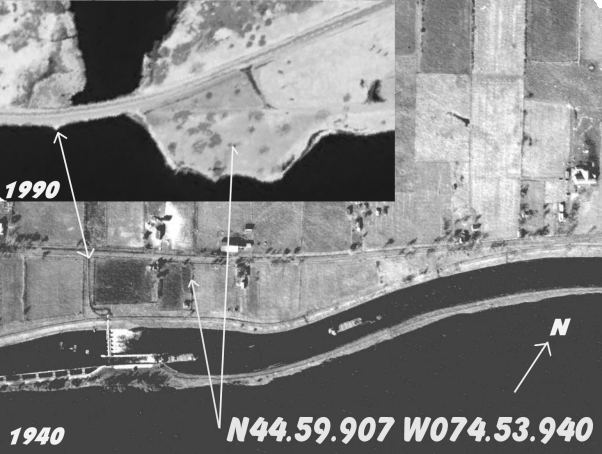 Before and after photos Source: http://www.waymarking.com/waymarks/WM83Y_LOCK_21_St_Lawrence_river
The History:
Built to bypass the Longue Sault Rapids, Lock 21 was constructed in the 1840's and last upgraded in 1898 when the canal was deepened to accommodate ships with a draft up to 14 ft (previously had a max of 8 ft). At the time of the canal upgrade, the first hydroelectric dam was constructed and it is legend that Thomas Edison attended the opening. The canal system is 270 ft long and 45 ft wide. The lock was operated by the Department of Railways and Canals until 1936 and taken over by the Department of Transport, which sunk the lock in 1958 to feed the Hydro Dam at Cornwall.

The experience:
Lock 21 is widely regarded as one of Ontario's best shore dives. Picnic tables, port-o-potty and a snack bar are in the vicinity. There is a per car fee to enter Macdonell Island. There is a line that guides you to the gates from which you can descend to the weir (60 ft). There are various lines throughout the dam that lead to various structures. The visibility is usually poor at 8-12 ft but can improve to 30 ft on a good day.