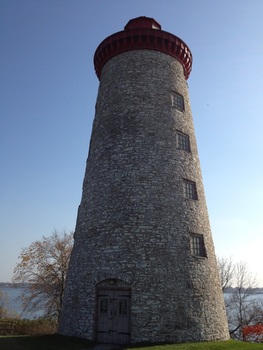 The history:
The windmill was the central ground of a squashed rebellion that took place in November of 1838. An American group called the Hunter Patriots, made up mostly of expatriates from another squashed rebellion from 1837, formed to help the Canadian patriots overthrow the British rule and form an American style constitutional republic. The conspiracy was organized in Masonic lodges in northern American border states. A group of 250 Hunter Patriots invaded in November and hoped to join with the Canadian rebellion; however, in Upper Canada the general sentiment was loyal to the crown. 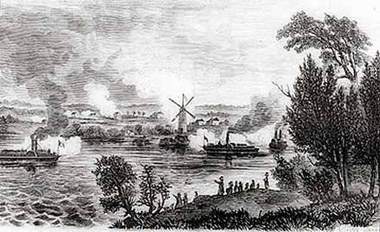 The battle of the windmill as depicted from the American shore
The Hunter Patriots chose Prescott as their first theatre of battle as Fort Wellington was a major British fortification on the St. Lawrence River. The Hunter Patriots gathered in Sackets Harbor, NY and the commander of the Patriots, John Birge led the forces in civilian vessels.

The Hunter Patriots wanted to employ George Washington-esque guerrilla warfare tactics but the British forces were ready for the impending attack as they infiltrated the Masonic temples and caught wind of the conspiracy. The battle culminated with a small group of the Hunter Patriots capturing the windmill and a standoff ensued for several days before the Patriots surrendered.

The experience:
Make your way past the windmill and down to the shore.
Gear up at the picnic table and head out in any direction. There is a gradual decline in depth (30'-60'). This dive is rated as beginner to intermediate as the current picks up at about 30'. 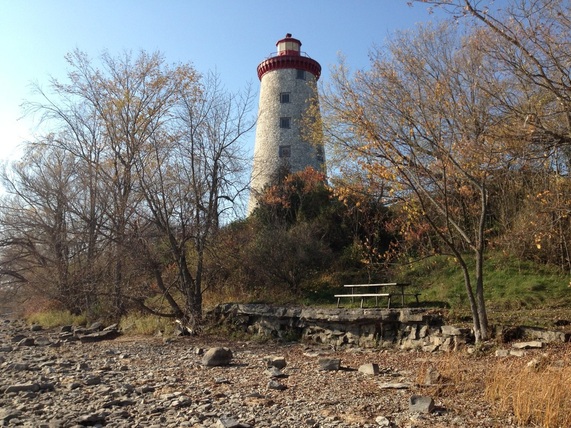 Your minds not playing tricks on you, the windmill was converted into a lighthouse in 1872
HTML Comment Box is loading comments...
Back